On New Year's Eve, Kansas City Mayor Quinton Lucas was seen celebrating the start of the new year with his family at Union Station. The annual event, which featured a balloon drop at midnight, was attended by hundreds of people from the community.

Mayor Lucas was all smiles as he entered the event with his wife and children, waving to the crowd and posing for photos. The family took their seats in the front stage 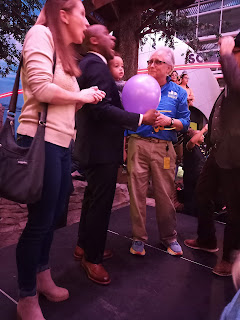 , eagerly waiting for the countdown to begin.

As the clock struck midnight, confetti and balloons rained down from the ceiling, filling the room with excitement and cheer. Mayor Lucas was seen hugging his family and joining in the celebrations, as live music and entertainment continued throughout the night.

"This is such a fun and special way to ring in the new year," said Mayor Lucas. "I'm so grateful to be able to spend it with my loved ones and the community. Here's to a happy and prosperous 2023!"

The mayor and his family were seen enjoying the rest of the evening, taking in the sights and sounds of the celebration. It was a memorable night for all in attendance, and a great start to the new year.